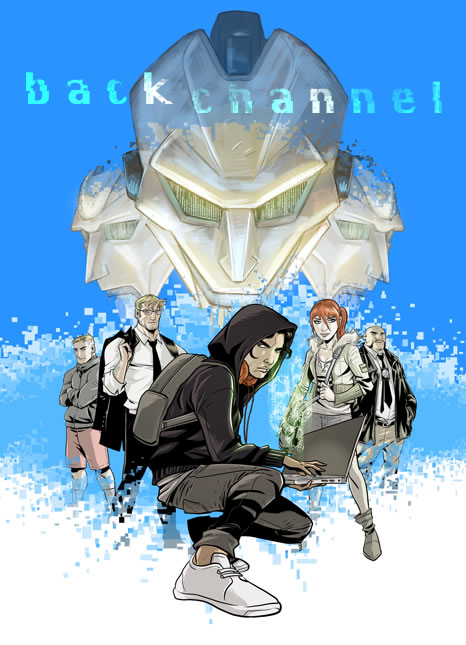 Backchannel centers on the relationship of TOM TANNER, a comic loving, engineering prodigy, and his father MARTIN, a widowed police detective.

While developing a highly sophisticated AI algorithm, a power awakens within Tom that grants him the ability to mentally hack into any device (technopathy). While initially using this newfound power for personal gain and petty revenge, he learns of a dark secret from his father’s past that will change him forever.

In need of a moment of escapism, Tom returns to his favorite digital comics. This time though, the comic is disturbingly on point with what Tom has been experiencing. As he continues to read, Tom realizes that there are encrypted messages in the comic from an unknown ally who clearly knows everything Tom has been up to.

When he discovers that the hacktivist group BACKCHANNEL has been tracking him and is aware of his new abilities and reaching out to him for help, Tom is set on a very dangerous path.

STAN LEE was a successful writer and editor, known to millions of fans worldwide as the co-creator of beloved superheroes like Spider-Man®, Iron Man®, X-Men®, The Fantastic Four®, and countless more that propelled Marvel to its preeminent position in the comic book industry.

Most recently, Stan was the Chairman and Chief Creative Officer of Stan Lee’s POW! Entertainment, which he founded with Gill Champion. For nearly two decades, POW! has brought Stan’s original characters and stories to television, feature films, and publishing for audiences around the globe. POW! continues to perpetuate Stan’s legacy by sharing his new creations and celebrating the impact he has had on popular culture worldwide.

*All trademarks are owned by Marvel Entertainment, LLC.